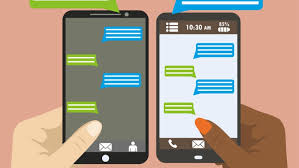 So, of course that includes your typical sale contract that is signed by both buyer and seller.

But, what about e-mails back and forth? What about text messages? Well, it depends.

As we all know, a contract–whether written or oral–“must result from a meeting of the minds of the parties in mutual assent to the terms, must be based upon a sufficient consideration, free from fraud or undue influence, not against public policy and sufficiently definite to be enforced.” Higgins v. Oil, Chem. and Atomic Workers Int’l Union, 811 S.W.2d 875, 879 (Tenn. 1991).

No matter what the medium, there must be a clear showing of offer and acceptance and definite/specific terms. If you’ve got that, then a notes on a paper napkin, e-mails, and, yes, text messages might work.

The critical issue was that, when buyer presented his specific sale terms via text, his text concluded with this line: “Please let me know if you want to move forward and I’ll get a contract to you.” The seller responded: “We will gladly accept your offer.”

Is that an offer and acceptance?

The Court ultimately concluded that “[t]he circumstances presented here show that the agreement was a preliminary negotiation and not a final agreement to which either party intended to be bound.”

The fact that a sale contract was referenced–but never signed–was the deal breaker.

This was the exact issue facing Chancellor Bill Young in Davidson County, when an aggrieved buyer sued Gibson Guitar to force the sale of the Valley Arts Building on Church Street in early 2018. There, Somera argued that a chain of e-mails between it and Gibson created a binding contract; in response, Gibson argued that Somera’s emails expressly stated that the terms would be memorialized into a sale contract, which was never signed by Somera’s deadline, and that’s when Gibson signed an actual contract with a third party buyer.

This consistent with recent cases in other states, and a good discussion of those cases can be found at this blog post by Best Practices Construction Law and the Massachusetts Real Estate Blog.

One of the most common collections questions I get is “I loaned X some money, but didn’t make them sign anything. Can I sue them?”  The simple answer is yes.

As long as the person making the promises is also the borrower, you’re safe. Issues arise, though, when you’re enforcing a promise by a third party to pay the debts of another. This is called a “Guaranty” (or, depending on how old a lawyer you are, a “Guarantee”).

However you spell it, a guaranty has to be in writing to be enforceable.

Under Tennessee’s version of the Statute of Frauds, no party may file a lawsuit “[t]o charge the defendant upon any special promise to answer for the debt, default, or miscarriage of another person….  unless the promise or agreement, upon which such action shall be brought, or some memorandum or note thereof, [is] in writing, and signed by the party to be charged therewith, or some other person lawfully authorized by such part  ” See Tenn. Code Ann. § 29-2-101(a)(2).

So, then the question becomes, how formal does a writing have to be? Can it be hand-written? Can it be an email?

Guaranty agreements are strictly construed and, in order find a guaranty, the language must contain the clear and unambiguous intent that the guarantor is agreeing to be liable. For more on guaranties (or guarantees), be sure to check out the Tennessee Supreme Court in 84 Lumber Co. v. Smith, 356 S.W.3d 380, 384 (Tenn. 2011).

In the case of an email, I’d ask “Is the email’s language clear and unambiguous in stating that Y is willing to pay the debts of X?” If so, I think it satisfies the Statute of Frauds.

David works at Anthony Legal PLLC, a boutique creditor’s firm.  Reach him at david@anthonylegal.com or by phone at (615) 869-0634.

Really proud of this kid, who marched in today’s parade (in pouring rain) because “people should be able to love whoever they want to.”
Me and the kids, hanging with Uncle Luke.
Loading Comments...