Last week, I talked to NewsChannel5 about a loophole under federal law that may allow borrowers to have their student loans forgiven, where they attended a “for profit” college that has either closed or made clearly false claims to attract students. 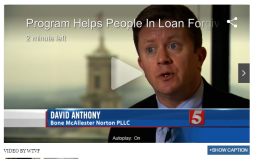 The law doesn’t apply to traditional colleges or universities, but, instead, to “for profit” colleges, a list of which can be found here.

A great background “primer” on these issues can be found in “The Rise and Fall of For Profit Schools,” which suggests that the “advertising aggressively” part is the root of the trouble. Saying that “these schools made promises they couldn’t keep,” the article says that the industry may misrepresentations to get the attention of prospective students. This generally involves advertising inflated post-graduation job placement rates, misleading claims about potential future earnings, and lies about their faculty and facility quality.

With the economic downturn, as unemployed workers were looking for work and new job skills, those prospective students were the perfect marks for such alleged claims. Because many were unemployed or low income, the student body relied on federal student financial aid to pay the tuition.

The NewsChannel5 report drew from this Wall Street Journal article, which presented the shocking numbers of students availing themselves of the loan forgiveness process. Five years ago, the government had received only a handful of such requests; in the past 6 months, the story says, “more than 7,500 borrowers owing over $164 million have made applications.

I am a creditors rights and commercial litigation attorney in Nashville, Tennessee. View all posts by David

David works at Anthony Legal PLLC, a boutique creditor’s firm.  Reach him at david@anthonylegal.com or by phone at (615) 869-0634.

Really proud of this kid, who marched in today’s parade (in pouring rain) because “people should be able to love whoever they want to.”
Me and the kids, hanging with Uncle Luke.
Loading Comments...
%d bloggers like this: